See Portugal Through Festivities and Pilgrimage

Festivities and pilgrimages: the best way to know lands and its people

When a country has so many centuries of history like Portugal has, it is inevitable that during all these years were created many festivities and pilgrimages that celebrate Portuguese traditions, beliefs, and culture. There are many festivities and pilgrimages that fill our country with music, food, and dancing, highlighting traditions with years and years of history, that we commit to maintaining alive.

In these festivities, people gather together for something in common: they celebrate places, customs, and the history that unites them. These are the moments that are worth it, that makes us understand how special it is to live in community and how characteristic is this feeling of sharing something, which is so tangible in these festivities. 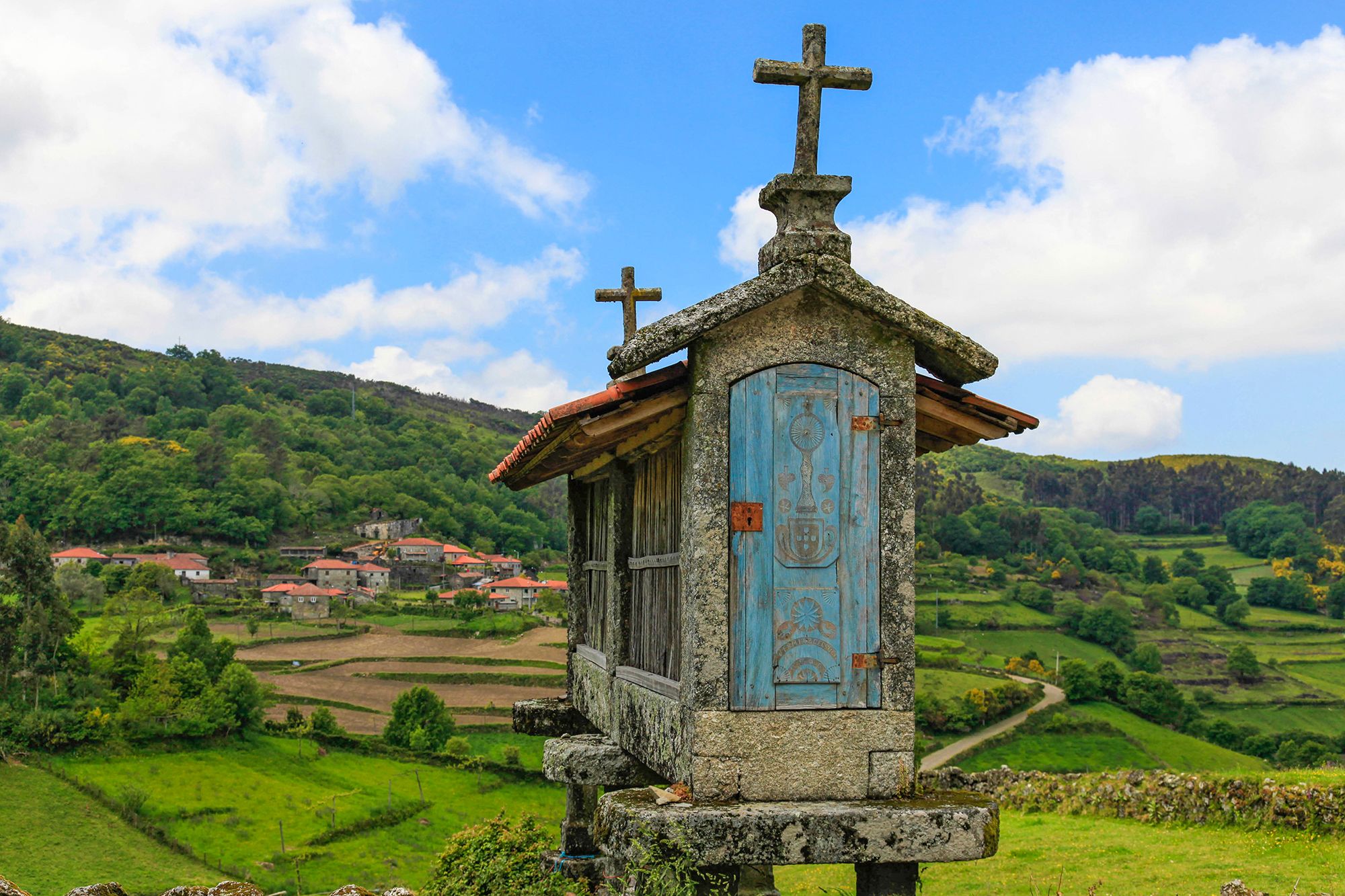 Despite none of these festivities are in the most well-known places of our country, such as Porto or Lisbon, we remind you that transportation will never be a problem: with our car rental with driver service you can travel around the country with no worries, and get to know amazing places. You can visit all these festivities and a lot more with UNIQ., in an adjusted to your needs and interests service. 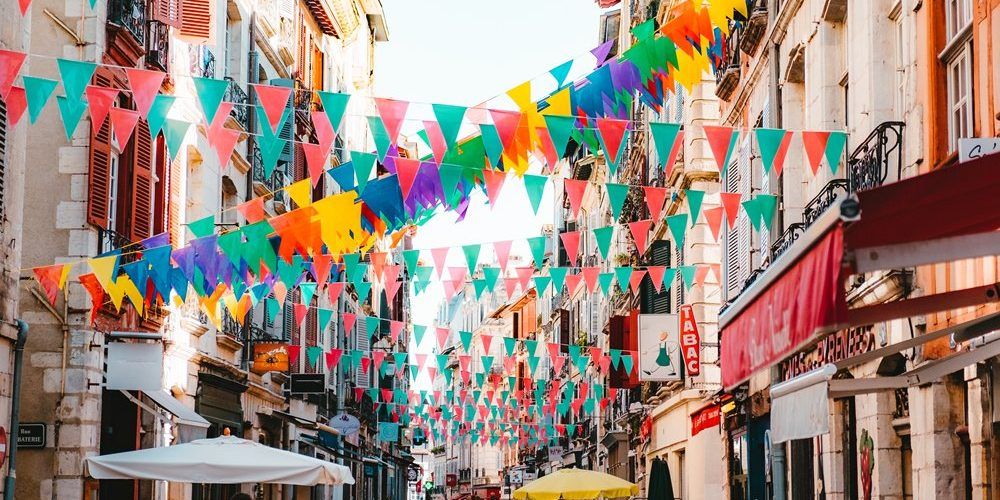 The Festa dos Tabuleiros is the most important celebration of Tomar city, that occurs every four years and that attracts countless people to the city. So, do not miss the opportunity to get to know this secular and unique tradition, that will only happen again in the next four years.

The Festa dos Tabuleiros (Festival of the Trays) represents the harvest season and it is one of the oldest cultural and religious celebrations of the country, that attracts hundreds of thousands of people on the Cortejo dos Tabuleiros day (Procession of the Trays day).

During the festivities, the streets are full of color while hundreds of girls carry the trays on their heads: each tray must be the girl who carries its height. The trays are composed of 30 pieces of bread and are ornamented with paper flowers, vegetables, and ears of wheat.

People say the Festa dos Tabuleiros is a festivity “from People to People”. How can you not be a part of it?

The Sebastianas are the festivities of Freamunde city, celebrated in honor to São Sebastião, and that fill the city with life, on the second weekend of July every year.

The Sebastianas count with more than a hundred years of history, and in the beginning these festivities were exclusively religious, but their purpose started to shift, turning into what we know today: a mix between sacred and profane, focusing on the cultural part, despite never losing its popular and traditional nature.

In these festivities you can count with choral societies concerts and other musical genre, popular parades with allegorical cars, samba schools and bass drums groups, processions and fireworks. The party ends every night with a very common tradition in the Sousa region: the “Vaca de Fogo” (Firework Cow). The “Vaca de Fogo” is a true pyrotechnic show, where a man puts a pyrotechnic box with a cow shape on his back and runs across the streets with a “shooting fireworks cow” on his back. People love this tradition and enjoy participating, running after the “cow”, or running from it.

The dimension and importance of the Sebastianas are growing and gather more and more visitors each year, so it’s a very interesting and unique festivity to experience once in a lifetime. 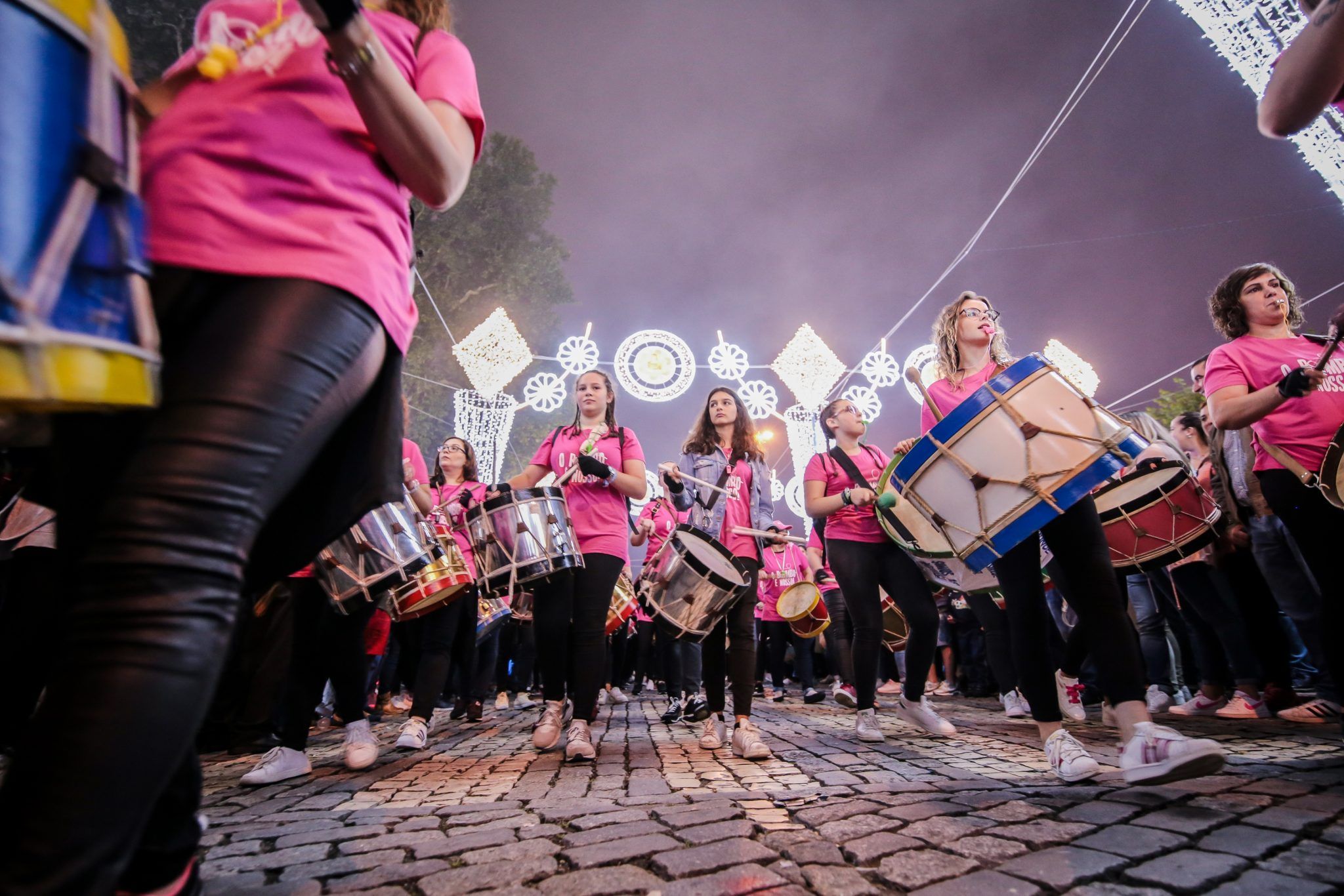 From 16 to 20 August in Viana do Castelo

The Romaria de Nossa Senhora d’Agonia one of the biggest Portuguese pilgrimages, founded in the 18th century, on a time where the devotion to Nossa Senhora da Agonia arose. This pilgrimage occurs in August, in Viana do Castelo, and attracts thousands of Portuguese and foreign visitors to the city every year.

The Romaria de Nossa Senhora d’Agonia has a very interesting, rich and diverse program. The “Cortejo Histórico-Etnográfico” and the “Desfile da Mordomia” are the events that we consider the most singular and special during the pilgrimage. And why is that?

The “Cortejo Histórico-Etnográfico” is a parade, similar to a living museum that is composed of more than 3000 people that march around the city streets, in a more than 2km path, where these people show the habits and customs of the city to their inhabitants. Yet the “Desfile da Mordomia” is one of the high points of the pilgrimage, where more than 400 women of the region wear a typical garment and several gold pieces (such as necklaces, earrings, and rings), parading on the main city streets.

There are several other special moments occurring during the pilgrimage, from concerts to parades, from the emblematic traditional challenge singing to the processions, from the floral tapestries on the ground to the beautiful fireworks. 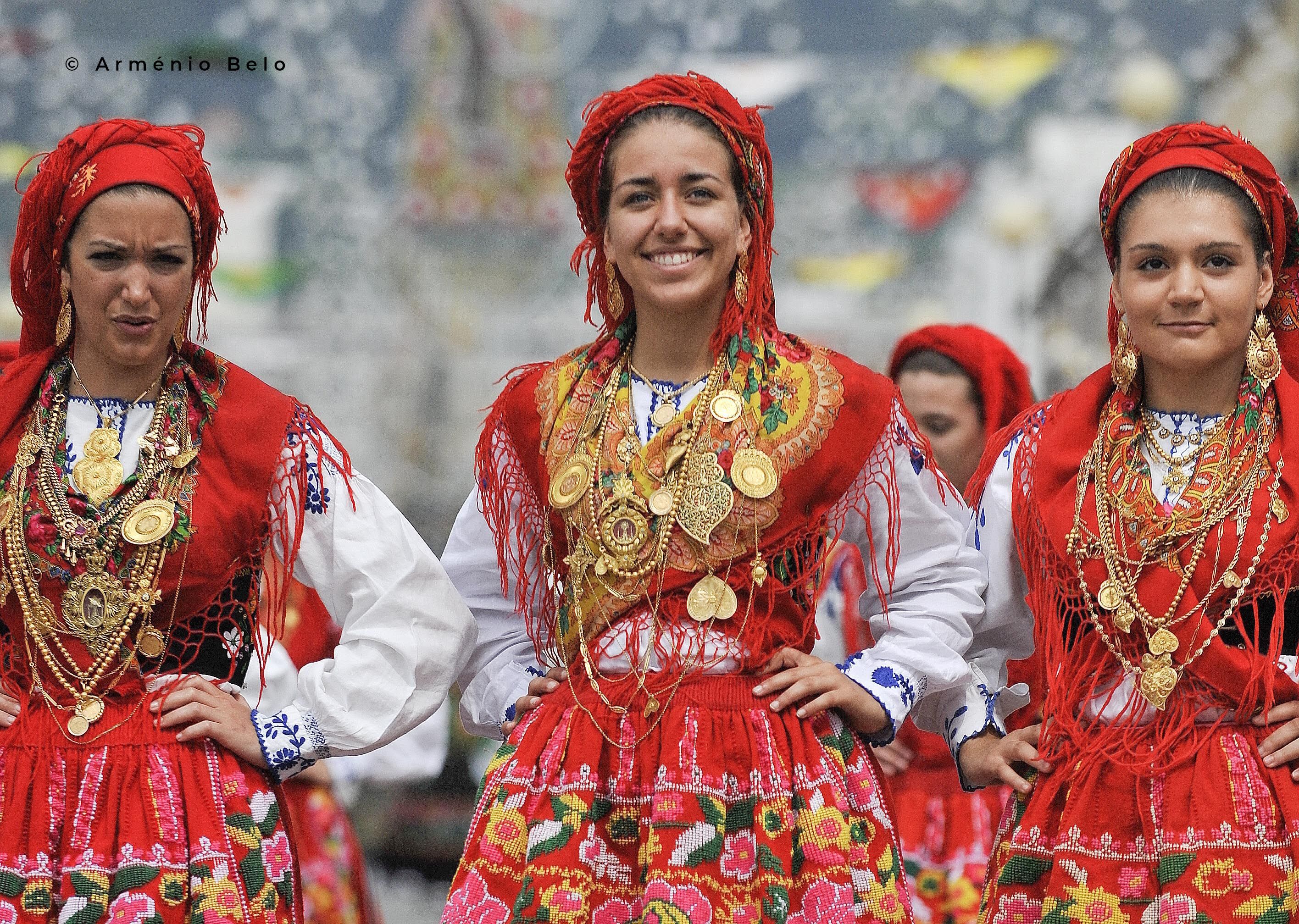 From 16 August to 9 September in Lamego

The Festas de Nossa Senhora dos Remédios occur in the beautiful city of Lamego in the Alto Douro, a place commonly known by its amazing vineyards and infinite beauty, that you can not fall in love with.

During the festivities, the city of Lamego doesn’t stop: there are religious celebrations that people preserve year after year, the bass drums that spark music and joy to the streets, the fairs where food, drinks, and dancing are always constant.

There are loads of things to see, such as the beautiful procession “Procissão do Triunfo”, cultural activities and sports events, several concerts and fireworks. However, do not fool yourself: Lamego is much more than the pilgrimage. The amazing landscapes, filled with mountains that wrap the Douro river, and the well-known Porto wine waiting for your tasting. So many moments that you will not want to miss in your visit to the Festas de Nossa Senhora dos Remédios. What are you waiting for? 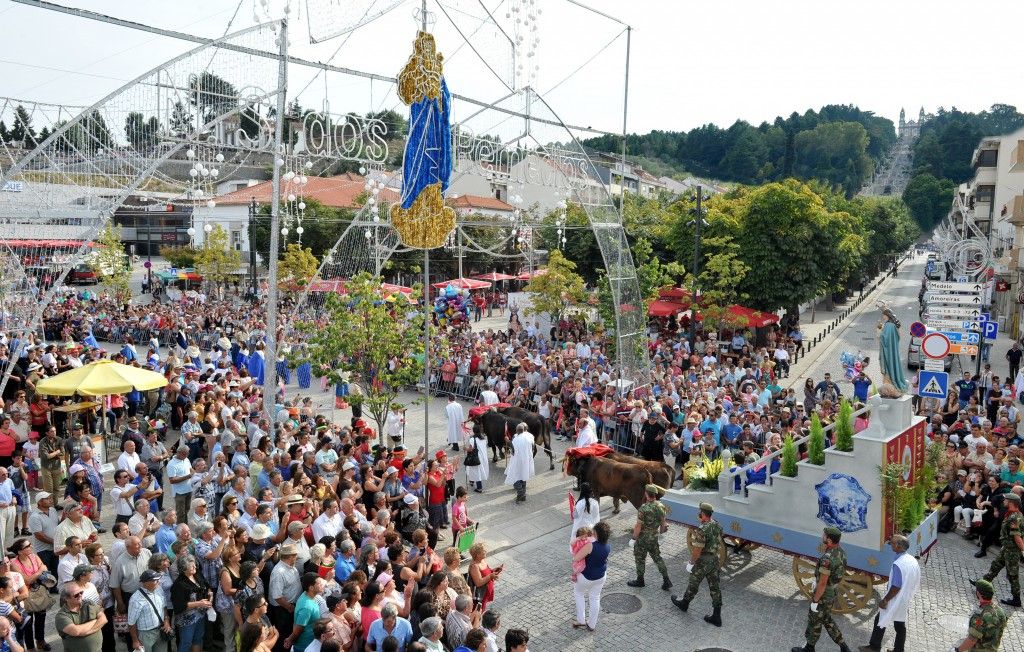 From 4 to 9 September in Ponte de Lima

Also in northern Portugal, the Feiras Novas is another pilgrimage in the country, that attracts thousands of visitors to the city where the festivities happen: Ponte de Lima. These festivities highlight the devotion to the Nossa Senhora das Dores and occur in the historic center of the Portuguese most ancient village.

It is impossible to not fall in love with the medieval bridge above the Lima river, that every visitor cross with a special spark in the eyes. During the pilgrimage days, there are many activities to participate in. From traditional challenge singing to the popular music concerts, that makes everybody dance until the end of the night, finishing with the beautiful fireworks that enlighten this magical and special village. 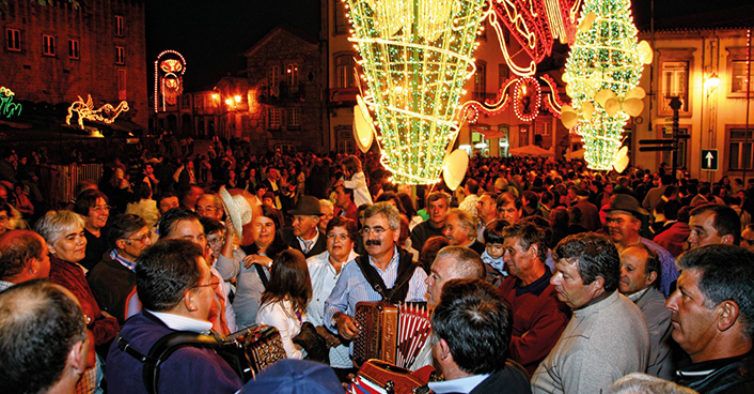 Did some of these festivities and Pilgrimages catch your interest?

So, don’t wait any longer and join us for an unforgettable trip.

Because we know how difficult it is sometimes to get to these places, we suggest our car rental with driver service, to travel to these villages and cities, with comfort and safety, without having to worry about transportation or where to park your car. You can choose one of these festivities and pilgrimages to visit, also having the possibility to explore the city or village where the celebrations occur, or you can combine many festivities and travel with us for several days. You can also complement your trip with touristic experiences that will add value to your trip. Every trip is planned to respond to your wishes and needs. Come on an adventure with UNIQ.

We will provide you with a comfortable vehicle, a Mercedes V250 7-seater, with all the necessary comforts, such as Wi-fi, air conditioning, cold water, universal charger, and a driver who will be your personal assistant that will make your experience UNIQ.

Find the magic in the Filigree Route

A time travel through filigree art